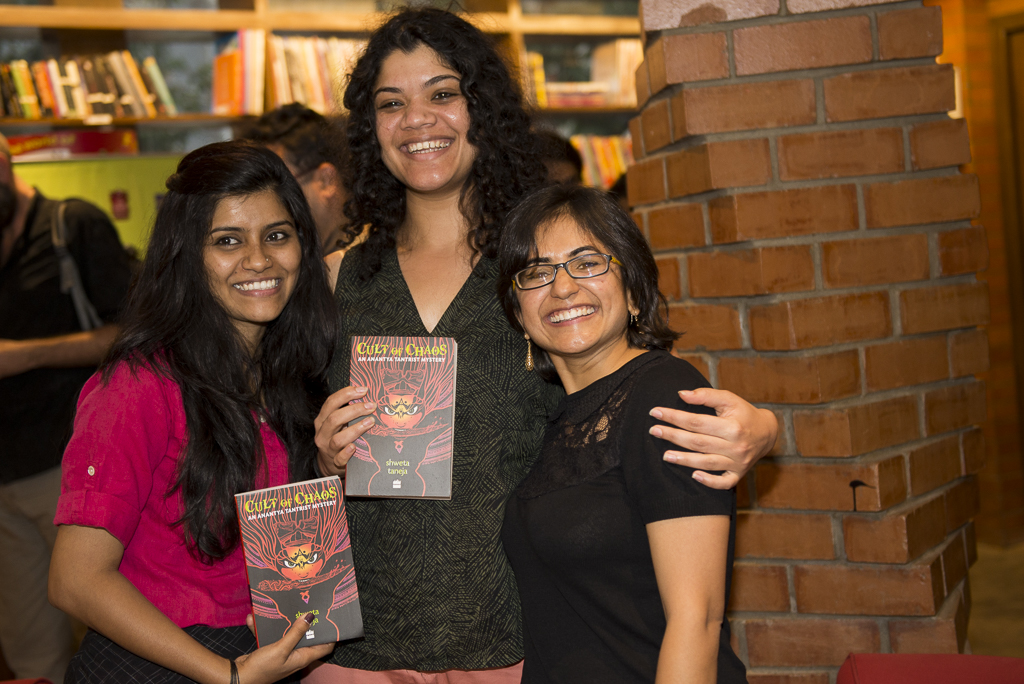 Never knew that a standalone event, where people are coming just to meet you, to celebrate your book, can give one such jitters. So it was that I had had a sort of a stomach churning, a week before my first ever book launch was about to happen. I adore Anantya Tantrist, the tantrik detective of Cult of Chaos. Absolutely love the book, but how was I going to convince 50-odd people to turn up at the event and buy the book at that?

And why should they come? I’m not a known author or anything. I’m just someone. But somewhere I so wanted to somehow celebrate the book and writing and completing and getting it published. I’ve always been the curious sorts, asking questions to everyone. So I wondered, why not a quiz? The idea stuck and we decided to do not just any quiz but a special one, on Occult Detectives to entertain the crowd.  I knew Anantya would like that and that way, I wouldn’t have to ramble on about the book for half an hour, or do a discussion, which can be so boring for the audience! That decided, we hired  QuizCraft Global to conduct this quiz.

To start the quiz, I had asked a friend Kanishka who had read the book at its manuscript level, to say a little about it. He started from The Ghost Hunters of Kurseong, which he’d read and how he was so pleasantly surprised at Cult of Chaos, which is extensively different from my first book. (And definitely not meant for kids) I blushed and got muddled in my head, while he said really, really nice things.

Sathvik Ashok, the quiz master from QuizCraft Global took over from there and kept people entertained for almost 45 minutes, scribbling and chewing pens, hitting themselves on the head or clapping at the chap who got the answer. The quiz had five rounds ranging from supernatural questions, urban legends, to Indian ones. My favourite one was:

ONE OF MY FAVE QUESTIONS:

“A female ghost with messy hair and tattered clothing is said to knock on people’s front doors asking for alms. Opening the door to this ghost is said to invite bad luck. Sometimes, she’s even recognized as an omen for death in the house. If you open the door, she hangs around your house and becomes a nuisance. What idea did people come up with to combat this ?”

Can you guess the answer? I will put it in the end of this post.

Post that,  author Sharath Komarraju, was asked to come on stage to take off the shiny wrapping off Cult of Chaos to formally launch the book. He also won one of the rounds of the quiz. He said, ‘I will keep it very short as I’ve been told to say exactly two words. I’ve read this book at the manuscript level and found it fascinating. So my two words are: Buy it.’ With this, he gave the mike to me.

I mumbled emotional stuff about how the book combines the two genres I love the most: fantasy and detective fiction. Of course with blood and violence thrown in. I’ve rambled on the same stuff in other interviews, which you can read here, here and even here.

Finally, it was Ajitha, the senior editor, who has been with Anantya and me throughout, who came on stage. She retold the story of when Shweta had met her first, a few years ago at Bangalore Literature Festival. ‘Shweta came up to me, introduced herself and said, I think Anantya wants you to be the editor of her book. At that time, I was stumped and didn’t know what to say, but it got my attention and I got back home and started to read Cult of Chaos. And I was hooked.’ On the part she loved about the book, Ajitha said. ‘The world is so fleshed out and real. And Anantya is just so like you and me, a woman who has grown up in India, is trying to live an independent life, and even though most of her gaalis are written in English, they are perfectly Indian. I think the time was right for a book like this, an occult detective fiction, to come out in the market.’ Am so happy she agreed to become the editor of the book!

The event closed with a few signings and a couple of photographs with friends. Signing off with the best comment overheard: “The age of the audience increased by 20 years for the next event, a poetry reading session.’

Answer to the above question: Naale Baa (Come tomorrow). The two words were written on every second door in the city to avoid a mysterious woman from knocking at the door at midnight.

A special mention to Ashu, who was there as always and to all of my friends for coming by and making it so much fun (And Kanchen for the owls)! Here are a few photos taken by pal Prasad N and the media coverage so far.

See? You should’ve come. It was super fun.