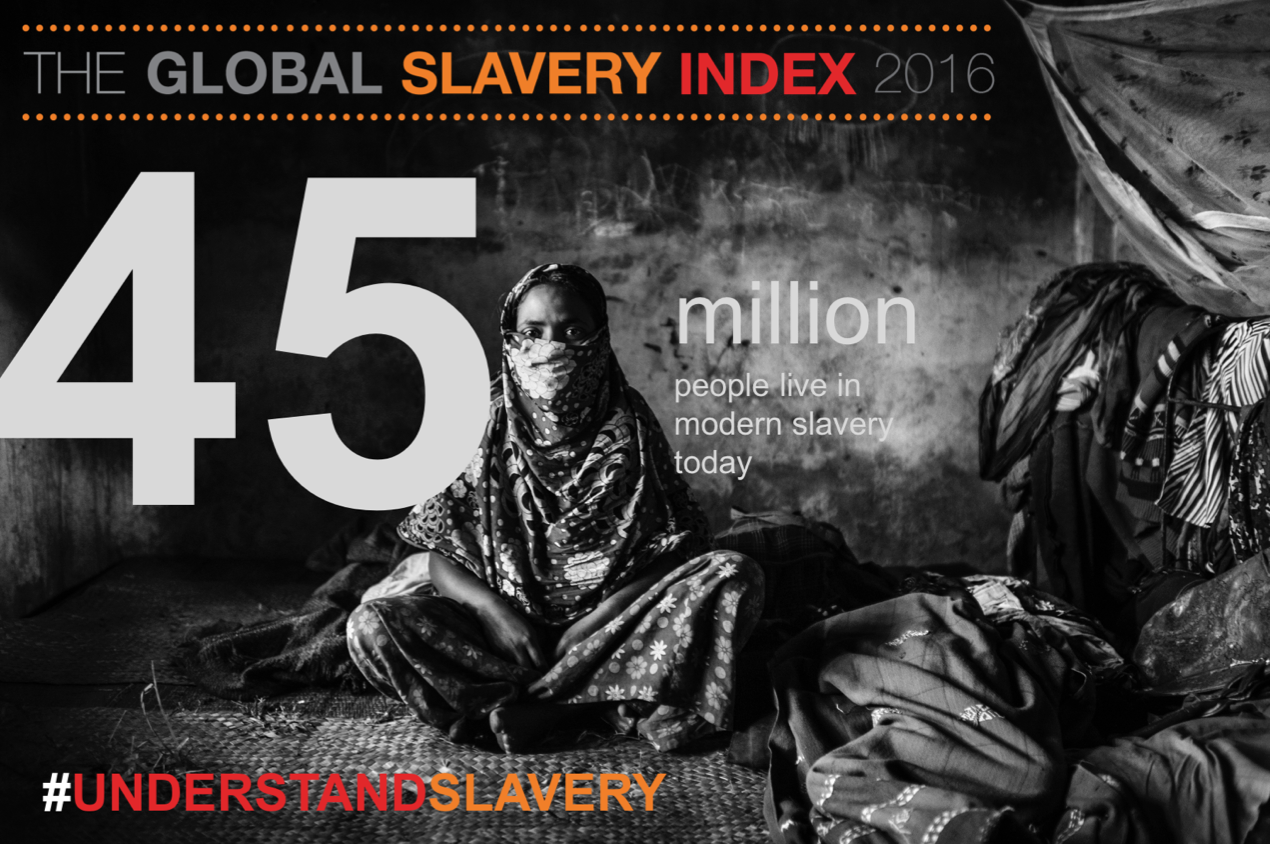 Even with such remarkable change, given India has a population of more than 1.3 billion people, there are still at least 270 million people living on less than US$1.90 per day. While laws, systems and attitudes regarding key ‘fault lines’ such as the caste system, gender and feudalism are rapidly changing, social change of this depth and scale necessarily takes time. In this context, it is perhaps unsurprising that existing research suggests that all forms of modern slavery continue to exist in India, including intergenerational bonded labour, forced child labour, commercial sexual exploitation, forced begging, forced recruitment into nonstate armed groups and forced marriage. (bold is mine)

…The survey data suggest that there are more than 18 million people or 1.4 percent of the total population, who are living in conditions of modern slavery in India. Industries implicated in the survey data include domestic work, the construction and sex industries, agriculture, fishing, manufacturing, manual labour, and forced begging.

While bonded labour has been outlawed for decades, survey data and pre-existing research confirms that this practice still persists. Narratives available from 2016 survey respondents identify that some respondents perceived their situation to be one of bonded labour, some of which is inter-generational:

“Sir, it is the sin of my father that I have to repay the debts unless I shall have to beg. I have a threat against my family. I am prone to physical violence everyday.” (Survey respondent, 2016)

“This is an old disease in the village that if you are not able to pay off your debts you will have to work as a bonded labor in the field of a powerful person. My husband was employed far from the village so that he can not run away.” (Survey respondent, 2016)

In other cases, it appeared that bonded labour reflected debt lending practices and continuation of a feudal mindset:

“There are many people in the village who were working with me as a bonded labor. I was physically and sexually assaulted when I was working in the field. I had also threat on my life and on my family. I was also threatened that I had to leave the village.” (Survey respondent, 2016)

“It’s very common in this village that we have to work for repay the amount, our family borrowed. I was one of them. My motto was just repay the amount as soon as I could. They threatened to evict us from our homeland, shown their anger if I denied to perform any task. Sometimes the consequence extended to my family and they used physical torture in several time.” (Survey respondent, 2016).

Bonded labour is not only illegal, research confirms that it has serious negative health impacts for those affected, who typically work in unsanitary and dangerous working conditions with no access to health care.

Examples of forced labour of domestic workers were described by survey respondents. While not all domestic workers are abused, domestic workers are a particularly vulnerable group as work takes place in private homes and largely out of the reach of regulation. Official figures in India suggest that there are more than 4.2 million men, women and children working as cooks, cleaners, drivers, gardeners and caregivers across the country. These estimates are from 2004 and experts suggest that there may be many more workers unaccounted for in these statistics….It is reported that girls as young as ten continue to be hired in private homes.Domestic workers can be subject to threats of and actual physical violence and in, some cases, sexual abuse.

“You are well aware that if a young lady works as a domestic servant she is always a soft target of being easily molested. So with me. I have not paid a single amount and in the name of debt I was made a victim of the sexual violence.” (Survey respondent, 2016)

Street begging by adults and children is a prominent feature of many Indian cities. Though many beggars do so out of economic desperation, survey data confirms that criminals also force people to beg:

“Though I am begging I am not paid a single amount. I have to deposit all to them. I am deprived of food and good sleep. I am not paid my wages only working as a bonded labor.” (Survey respondent, 2016)

“I was forced to do begging and still begging with the others…I cant say anything to you because I am in constant fear. I am threatened by my employer not to open my mouth to anybody otherwise I will be punished severely.” (Survey respondent, 2016)

Existing research and the 2016 survey data confirm the existence of forced prostitution. As one survey respondent said:

“My wife is kept in the locked room and sexually harassed and being forced to work as a prostitute. She is physically punished whenever she refuse to have sex. My family is under death threat. We are also threatened of legal action against us.” (Survey respondent, 2016)

“I was forced to work in the flesh trade… Can you imagine that I kept in a locked room for the whole day when I refused to work under pressure? It is because they had always threatened me and my family for physical violence and tortured.” (Survey respondent, 2016).

Existing National Crime Records Bureau data indicate there were almost 5,500 cases across India under existing human trafficking laws in 2014. As the law does not differentiate between human trafficking and sex work, and there are no formal guidelines on who is identified in rescue and raid situations, it is impossible to know if every one of these cases involved force or children, or whether some were simply cases of economic survival.

This is just a little bit of the report. Read it here completely. Think, ponder, try and change.