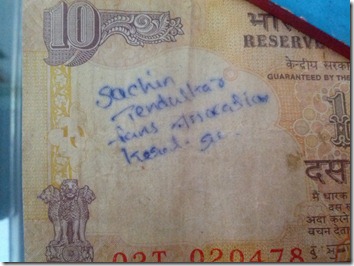 The note, recovering from the washing machine fiasco

Recently, a ten rupee note was discovered, dried, wrinkled, faded and folded in a washed jeans pocket by this writer. In exchange for the security of a dirty, almost-empty, much-travelled wallet, the ten rupee note revealed its yet untold story:

‘Atleast I would not die in a pocket, forgotten, slowly decaying into mulch,’ it says, thankful. For that is what it thought would be its end when it had been travelled from a sabzi-seller to a forgetful human hand who placed it in a rough, but a pocket of a pair of jeans.

‘That’s always a little dangerous, a pair of jeans. For you can be easily forgotten and then before you know, you are in the washing machine, screaming to be let out. But who will listen to you? The credit card receipt, the coins and the scribbled on notes, all are drowning too and too busy trying not to be shrunk and converted to mulch,’ it told this journalist.

Now lying in the comfort of a wallet, it hopes its next destination is someplace exotic.

‘You never know where you will land up,’ it says, ‘it’s not like I can control my exchange from one hand to another or in any way control  my destiny. Humans use us, millions of us, everyday, callously passing us on from one to another for things they don’t need. We don’t have a say in where we want to go. Did a note ever refuse to go into a rickshaw puller’s rough hands? Or a filthy hand of a garbage collector, his hand squeezing me so tight that I thought I would disintegrate? Or even a greedy, soft hand which keeps me under a mattress for years, without air or light? Sometimes we are even buried alive and forgotten until someone changes upon a treasure. No, we are nothing but things for humans.’

This tenner was created some five years ago (it doesn’t remember its exact birthdate) and thrown into the overflowing (with its type) economy of India . It already looks like it had been through some rather rough times (other than the washing machine).

‘I am not a big number. There are millions of tenners like me out there. I am exchanged fast, without any hesitation. But it still hurts if someone abuses me and calls me chillard. I….’ the note stops, overwhelmed with feeling, ‘All the tenners want is some respect from humans. There was a time when my ancestors were put in iron safes by clean hands with a photo of goddess Lakshmi next to it. We were celebrated, we were worshipped. We had a festival to our name.’

But these are just stories that the ten-rupee note has heard from its elders, who have heard it from theirs. Now, times are quite different. Now, these stories have become myths, told to each other to provide comfort for one’s purpose-less, disrespected life. Tenners are nothing but short change now and that’s the dark reality that each of them face every day in their lives.

‘Not even the hundreds, no mam! It’s only the five-hundreds or the thousands who are coveted now and get the privilege of a pooja. Though I hear,’ he whispers, carefully looking around the wallet, in case there’s a big note lying around (There’s not. I am a writer, my wallet is always empty), ‘that the thousands might all be recalled you know.’ Recalling is the worse nightmare of any note, of any denomination and age. Something worse than death.

‘To be torn, burnt and destructed. To simply cease to exist,’ it shudders. Every year, thousands of notes of all denomination are recalled by the RBI, after they have been abused, become torn, unreadable and broken by rough, hungry exchanges between humans. Then they are burnt without any ceremony or prayer for peace for their services to humankind.

‘That’s the least your race can do! Respect us for our service,’ it shouts, angry, ‘Humans have a saying that money makes the world run around. Show me where I was ever running things around me?’

When I ask it about the scribble on its side, with faded ink, it smiles again. ‘It was in Kerala, it says, proud that it has travelled so far. (If you can’t read it in the photo, the writing says: ‘Sachin Tendulkar Fans Association, Kerala’) I was donated by a fan of Mr Sachin Tendulkar himself, to a diligent volunteer of the STFA who then tattooed this on me. It was my proudest moment. Tell me how many tenners you have seen, who can boast of a name of a celebrity on their skin?’

When I tell it no one, except for it, it says, its eyes glazed with memory, ‘Those were the days, madam. Those were the days.’ It entered the emptied wallet, glad for space for a while and waited, for a new adventure. In some ways, thankful that atleast travelling won’t stop, even when the economy tanks. It’s only a tenner after all.

Writer’s note: I have tried to quote the tenner as closely as possible. As promised to it, the ten-rupee note has been carefully ironed, as new, and sent off to a new travel. May it never be recalled.

PS: This post is dedicated to my brother, along with whom I have counted innumerable number of money for the temple that my grandfather was a treasurer for. And this post is dedicated to my darling grandfather. The note brought a smile, a tear and lots of memories. Over the years, I have seen many interesting scribbles on notes, from association markers, to life quotes, to love proposals, to messages to each other. I have always loved reading them and imagined their stories. This time around though, the story that came to me was this note’s. Fascinating!

4 Replies to “Sachin tattooed on my skin”