It’s been three years since I began writing stories as a profession. I have had three books published so far: The Skull Rosary, The Ghost Hunters of Kurseong, Krishna. Two of these released in 2013. Needless to say, I feel good. 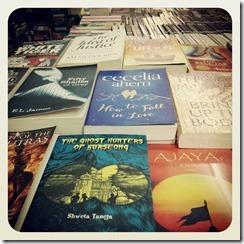 I started writing without any knowledge on how to write,  how to edit, what and where to edit, how to send a proposal, where to send a proposal, who to connect to,  who to approach for getting published, or how to market my books. I have learnt everything all thanks to countless blogs of helpful writers, and advice from writers, authors, editors, publishers that I have been lucky to have found. Of the advice I have received, some has been well meaning, some funny to downright hilarious, insightful, offensive or kind. Here is some of it:

Change your surname: Yes. I got that. A publisher over a cup of coffee told me to change my name and surname and make myself sound Bengali or Anglo-Indian if I wanted to get published in India. Fine, it was a joke and I didn’t really take it seriously but jokes always have hidden truths. Right? So how many of you have seen a book, read book’s back cover, seen the author’s surname and made humongous assumptions about him/her? I bet a lot. No wonder actors change their names, how their names are spelled and their affiliations in Bollywood. And the fact that astrologers are doing so great.

Write more to make money: When I asked a helpful author over email on how he was making money (yes, I can be quite upfront about these things on emails), he told me he wasn’t till the first five books of his got published. But slowly, as little money trickled from each of the book (and believe me, most of it will be littlebee trickles), he’s started to make some moolah. But not enough for designer clothes or big cars. Just enough for survival, a jhola, a glass of wine and not being dependent on anyone. So there. Accept this fact (no Bollywood doesn’t enter the picture) and move on.

Continue to write and write: Advice through a short sweet tweet when I asked KP Singh (Raisina Series) what he did to market his own book after it was published. I personally discovered him not through any reviews / media interviews / friends advice / literary fests, but at a bookstore. I picked up his book because I liked what I read on the back cover. Not because I had heard of him, thought he was cool, liked his name or his  face (sorry, Singh!) If that’s how books get picked up, maybe you need to rethink on that marketing, fellow authors.

Give back some advice: When I thanked, Zac O’Yeah, a well-renowned author for his kind email and advice on writing and publishing which I desperately needed, he gave me another to follow. He told me to continue the circle, to be supportive to authors or writers who approach me, tell them how they can get published, guide people, guide people to fulfill their creative ambitions. And this is one advice I intend to follow. I am not saying that I know a lot about the industry, but whatever I do, I would love to tell you all. I would love to connect you, tell you how to connect with publishers, what to write in proposals (though sorry, I can’t tell you on what to write about). Because we are in the same boat, you and I. Both of us want to bring alive a part of our dreams.

Readers can tell you when something’s wrong, but not what: This came from a blog of one of my ever fave writers, Neil Gaiman. Primary readers (and it’s essential that you get your book read by some) can tell you there’s something wrong in your book, but when you ask them what it is, most probably they will point out to the wrong thing. Don’t ask me why that is, it is. Neil says so. And I know it is so.

You’re published, now sell: That was helpful advice from a publisher. The baffling Indian publishing industry is the only one where the publisher can happily shirk off from the majority of work involved in marketing the book. It’s like a pen-manufacturing company asking the designer of the pen to sell the pen in the market. I don’t know why it is as it is, but it doesn’t look like changing. An author friend told me it’s because publishers don’t have much money to market each book. You should be thankful that they are producing and distributing it. Yes, but they also tend to keep 90% from sales, so they should market all the more, right? Have no clue why that logic doesn’t work in this industry (read the heading). According to me, the books are left in the hands of authors to market, who frankly totally suck at marketing. They have no clue what to do, which is why great titles are completely missed.

Media coverage + lit-fests = your books will sell: This came from a PR friend and lots of other well-wishers I went to after the above advice, desperate to figure out how to market my book. And I did fall for it. Most of it though is bull (Yes, I believe it. Yes, I believe it. Yes, I…). Though this is the game that a lot of authors seem to play. Yes media coverage feels good for the ego, but very less readers actually pick up your book when they read about you in the newspapers. They pick it up because 1) friends recommend it, 2) they like the cover, like the backcover, like how a couple of inside pages read 3) have read your books before. As a debut author, readers don’t know you. It’s better to push your book slowly and patiently in specific groups rather than blast it onto media. And wait for the lit-fests to come to you after one of your books has become successful. For all these will happen AFTER your book gets a few readers. So focus on getting readers, one by one, one book by one book. Of course nothing is stopping you from playing the game, but remember if the game gave all winners, all books would be bestsellers. Well, that’s my opinion on it now. But let’s see what 2014 brings in.

Media coverage / sales for Book 1 means you ensure a contract for your next: Got this from another marketing expert. Nopes doesn’t work. A publisher will reject your next book (unless you are like super duper author), even if book one with them sold well and you frequent page 3 parties. Why? Because the editor might not like the book or it might be a completely different genre like mine was. Nothing to do with you as an author. My debut book, The Ghost Hunters of Kurseong, was accepted by Hachette India through an email submission, from the slush pile, without any agent/connection or media coverage. The editor told me this was the one book in 2012 that they picked from the slush pile. My second book was rejected by Hachette and many other publishers, even though I had made a sort of a name for myself in the industry. Reason? Because it didn’t fit their type of books and the genre was different. And now it’s found another publisher as well. The game goes like this. So there’s no surety on a contract for a book, not even when you make it HUGE. Better to go back to writing.

You’re as good as your last: Neil Gaiman again. (Love that guy!) Even if you dish out the next bestseller, when you go back home horribly drunk and giddy and plan to write your next big seller, you face the empty whiteness of your word document and the silence of no keys plonking, alone. No amount of success, praise, media coverage, people can help you write a better story next time, or give you a great story idea . So be thankful for all the ideas that are swimming in your head and meanwhile, keep writing.

It’s a shitty line of work. Quit: This one was from an author who struggled for quite a few years, with great books out, but not enough sales. This was also two years ago. Now he’s become a best seller and made it huge internationally. I don’t know if he remembers this advice, but I do. And I am going to ditch it. Not because I hope I will make it huge someday like him, but because I seriously can’t stand that Anantya Tantrist wriggling in my head and want to get rid of her by writing her series. (More about that, soon).

That’s it for now, folksies. Will add more as and when I remember the advice.  Happy 2014 ahead.