Sexuality simmers in ancient tales of India. While I was researching for my current book (a series based on tantrism), I came across the lovely tale from Vetala Panchavimsati, an older version of Vikram-Betala stories.

In a temple in the city of Shobhavati, through the favour of Goddess Gauri, Prince Dhavala marries Madanasundari, the daughter of the king
named Suddapata. Svetapatta, Suddhapata’s son, one day proceeds to his own country along with his sister and her husband. On the way they come across another temple of Goddess Gauri. Dhavala goes into the temple to pay homage to the Goddess. There he happens to see a sword, gets obsessed to offer his head to the goddess and does the same. When he does not return for long, Svetapata enters the temple and gets stunned to see Dhavala dead and his head presented to Goddess Gauri. Through some irresistible urge he also cuts off his head and presents it to the Goddess.
After waiting for a long time for her husband and her brother, Madanasundari goes in to beg something of her. She requests the Goddess to restore her husband and her brother. Hearing this Goddess Gauri asks her to  set their heads on their shoulders. But out of excitement Madanasundari puts the head of her husband on the body of her brother and that of her brother on the body of her husband. Both of them come back to life as such. Madanasundari then realizes her mistake, but what has been done cannot be undone. At this stage Vetala asks Vikram, ‘Who is Madanasundari’s husband, the man with her husband’s head, or the man with her husband’s body?’ The King’s reply is that the person with Dhavala’s head on his shoulders is the husband. 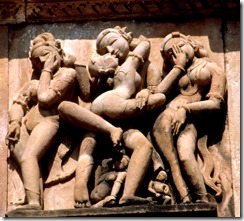 Girish Karnad got inspired by this tale and created his play Hayavadana. The story has been taken thanks to scholar K Mangaiyarkarasi’s research paper which compares this tale with Girish Karnad’s interpretation of it. It’s fascinating how richly coloured our myths easily exploring even taboo subjects. The story swims with incestuous undertones as well as questions one’s idea of ‘husband’ and ‘wife’. By today’s high prude standards, it’s insulting and could get someone into jail, even because of retelling of it.

Another thing that next ceases to amaze me is how tantrism and its esoteric cults in this country represent the breathable spaces, the perforated gaps in the suffocating, prudish morality of today. Which is perhaps why the cult is considered evil and seen upon with fear.