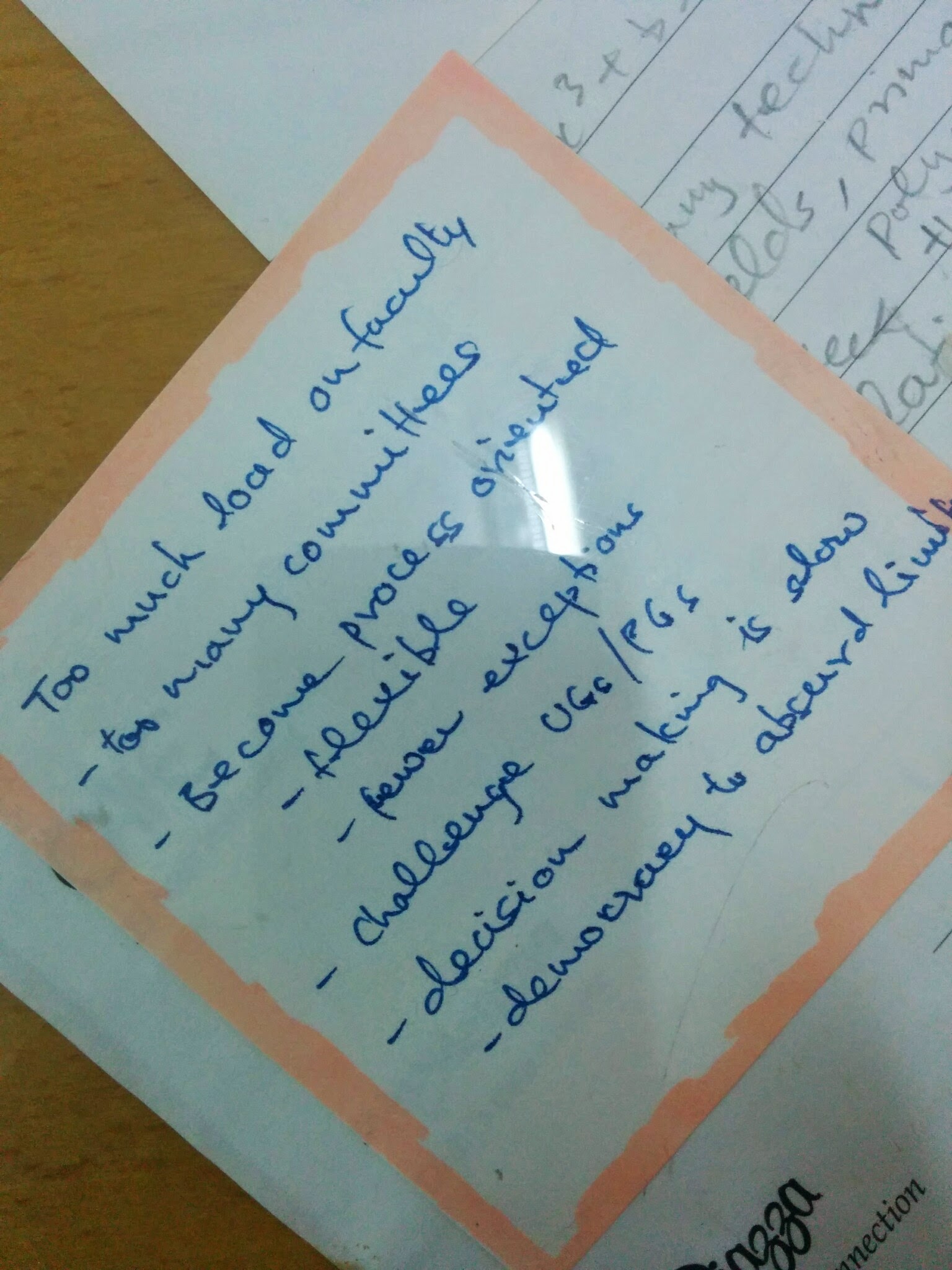 ‘Do ghosts stay in Banyan trees or Peepal trees?’ I asked the gardener, a young fellow, sitting on his haunches in the IIT-Kanpur campus nursery. It was a question which, pardon my pun, had been haunting me since days. I usually mess up my names, so couldn’t remember which tree it was that was a popular ghost hangout in India’s village folktales. In many ways, a genuine research question from my end, a writer who collects folklore stories.
‘Eh? Ghosts are not real,’ said the senior gardener, an irritated old man, before the younger one could reply, dismissing my question . I asked the same question to a  professor who had been kind enough to take me out for dinner in the city (She rides a bike, has fond memories of Kurseong, and is  a blast of a thing to hang out with).
‘You won’t find any ghosts at the campus,’ she scoffed, ‘it’s too clean.’

Over the years, the campus, as if to give a contrast to the filthy, chaotic, grimy city that surrounds it, has become pristine. The roads are swept, wild bushes have been cropped into submissive, acceptable shapes and guards open and close gates regularly, on time. It’s clockwork, it’s boxed, and I agree – a ghost would feel rather stifled.
But I wasn’t about to give up. I decided to turn to students, always more open about things that don’t exist and quite imaginative. So I headed to the undergraduate literary club (assuming people interested in fiction and poetry have higher levels of paranormal imaginations) and asked them.

‘Are there are ghosts floating around in the hostels?’
‘Well,’ said a boy, ‘there have to be no? Since there are so many suicides.’ He told me a macabre tale of a room (I forget the number) which has had two suicides in a row and then was talked about for years.
‘Yeah,’ said another, ‘but the room is cleaned, new students come in for the next semester and the ghost is forgotten.’ As I gulped that fact down, one of the students mentioned the virulent post I’d written about IITians way back. (Trust students to come well-prepared to an impromptu discussion!) I gulped again, caught. I had completely forgotten about it.
‘We thought you would come here and hate us,’ said the student.
‘It’s not about you,’ I claimed quickly, trying to mend things, ‘It’s about the arrogance that a tag like IIT carries in the society. I mean studying here doesn’t make you write better books or make better movies. Then why claim it? Do you feel proud to have come into this university?’
For I am fast learning that kids actually get depressed if they don’t get into an IIT.  With good reason perhaps. The campus has the best faculty, the best facilities, sports complexes and anything a student might need. It also has a great placement cell.
‘Everyone here gave the exam and passed it,’ said a first-year student. ‘So we don’t feel special in any way here. But when we go back home, our family fusses over the fact that we got through IIT. Personally, I feel the credit goes to the coaching class I took. They promised me they would put me into IIT if I paid their fees of a few lakhs and they did.’ There’s humbleness in the statement, but there’s also the truth: Coaching classes have cracked the IIT exam, which is one of the reasons for its skewed gender ratio in the campus today.
I continue the discussion (my badgering might be the reason they asked me to judge a haiku competition later on.) throwing in a casual question about truth and if they feel it can be defined holistically. It was a trick question. For the arts teaches you to look at the world personally, look at fractures and not the whole. The whole can never be defined. Whereas, in science, you can’t start with uncertainty. There has to be some base, some solid ground from where you start building things. The rest of the hour goes by happily, in confused arguments and flabbergasting rhetorics.

This conundrum carried into the faculty tearooms I visited. At the Arts department, the faculty I met, spoke the same language as me, that of broken pieces, of fractures. But the most interesting perception I found was at the Computer Science department which carries the creme-de-la-creme of both students and faculty at the campus. I guess because computer science gets the heaviest of salaries (a high concern for parents who’ve spent lakhs on coaching their kids to get into IIT) and remains the most fashionable professions in India today. The discussion started with two mathematics professors. (No female faculty here, so I might have been the only privileged female to have entered the tearoom in a long, long time.)
‘Isn’t all modern mathematics made of assumptions, what you would call axioms?’ I asked. Rather cheekily, I confess.
‘Mathematics is the absolute truth,’ one of them replied, ‘the language which will be understood universally, across time.’
The statement, though a good start for a mathematician who has to complete the starship started by others, was bait for the artist in me. So I fell, hook, line and sinker.
‘Will someone understand it one thousand years later?’
‘Yes.’
‘What if an alien contacts us and doesn’t understand the maths we’re working on?’
‘Not possible. Mathematics is the true language, the absolute.’
‘Ok-ay,’ I said, sipping tea for a bit. ‘Do you understand the mathematics that was explored by the Greeks and the ancient Indians?’ I had just doled out my finest trap.
‘No,’ he said, ‘But that’s because I don’t try to.’

We left the argument midway, because each had to go back to their own professions, their own convictions and passions. The conversation stayed with me because I was fascinated, as a person who’s always fractured, looking at broken pieces of truths, that someone could be so absolutely sure of proofs and axioms other humans have made. I guess it has something to do with the fields both of us work in.

Another equally fascinating encounter was with a superstar prof, again a mathematician, a really senior one, who late night after dinner, asked me a problem of something called the pigeonhole principle. Forget the solution, I couldn’t even understand the problem. He, in drunkenness of spirit, his eyes shining bright with the true power of mathematics, tried to explain it to me again and again. I might have been the most failed student he met.

I stayed at IIT-Kanpur campus for three weeks, a heavenly stay in an apartment which was far too big for me, my husband and the two minimum suitcases we carried with us. We cycled back and forth, from our office to the various canteens, an Olympic size pool, to badminton courts, to the tiny bookshop which has nothing but textbooks, to the beautiful library, to Cafe Coffee Day which has subsidized coffee for some reason, to the backlanes where guards try to stop us and little owls sit on lampposts, staring at all the human drama. We met and argued and discussed many things with intelligent and fascinating people, each working with dedication in their own fields.

We also saw how the campus, a little world in itself was a strictly segregated one when it comes to social interactions. The faculty there were the gods, followed by the students. (A male professor’s wife, who wants to throw her weight around at the campus, calls herself ‘faculty wife’, a term I remain fascinated by. In another anecdote I heard, the rickshaw pullers and the dhobis ask more money from visiting parents, citing that their child will start earning in lakhs per month in a few years time.) Then comes the staff, the full-timers who get all the benefits of a government job and live on campus, and the contractors, the ones responsible for sweeping, cleaning, caretaking, who get nothing but a minimum wage and longer working hours. Each one low on the pyramid is scared of taking decisions in case the one up on the pyramid has a problem. So far, exactly how everyone in a government establishment functions.

As I walk from the faculty apartments space to where the staff lives, the streets get thinner, the lights dim and temples and oily samosa joints crop up. This segregation between staff and faculty remains, in different canteens on campus (one of the canteens is known as staff canteen). My husband who goes and plays badminton in the old sports facility, is asked by a professor to come in the morning and play with them. Because evenings are for staff members. This divide pervades the campus as does the divide between the cream departments and artsy ones like design and literature, who are sidelined in this university, offering courses which students are forced to take in the name of ‘holistic’ education. Seems that like its clean roads, clean boxed buildings and controlled landscapes and rules, the campus has fitted in a social division too. Intelligently and logically filed, in boxes.

The rest of the adventure follows in pictures. Enjoy!

This was a perception over a short stay at the campus, not the absolute truth, rather just that–broken perceptions. Any assumptions, exaggerations, offensives remain mine.

8 Replies to “The ghosts of IIT Kanpur”