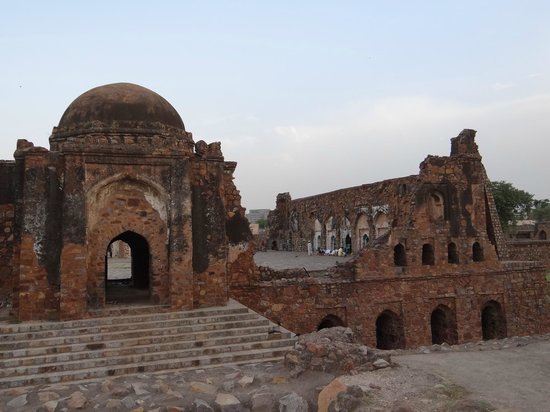 A worshipper whispered to me that a hundred years ago, under the British rule, these ruins were haunted by ghosts and pretas and thugs and tantrics and dogs and bats and the Pillar djinn wasn’t a saint. He turned into one post Independence when partition changed the dynamics of the capital city. That’s when, people, maddened by grief of what humans could do to other humans, left with no hope and no other saints or gods, crawled to the ruins, clutching letters of hope. They turned to djinns when they saw the worse in human nature. For they hoped that djinns, who according to Islamic mythology live for centuries and are made of smokeless fire, might know something about life and dignity that humans forget.

The myths also say that djinns are invisible to the human eye, can fly at great speeds and take shape of an animal or possess vulnerable human bodies. And they’re also like humans in nature. Some can be trusted, some can’t be, some are good, some are pranksters and some only know evil. Stories floating in the Feroz Shah Kotla ruins talk about how they like sweets and also like to possess young, gullible women who’re dyeing their hair on the roof.

I stand in front of the 3rd century Ashoka pillar that gave the rather unusual name to the djinn-saint and see the letters and photos tied up to its grill. Every night, the ASI staff takes them off, but more worshippers come with more hopes and requests to tie more ribbons and letters.

The pillar, which is not the doorway to the djinns and placed towards the north of Jama Masjid, is an ancient Ashoka pillar which was originally installed in Ambala in the 2nd-3rd century BC by King Ashoka. Sultan Feroz Shah Tuglaq decided to bring it all the way from Ambala to Kotla when he was building a new fort in the 14th century. What consumed him, an otherwise decent ruler, to transfer this pillar on a massive carriage with 42 wheels and drawn meticulously by 200 men? Did a djinn whisper in his ear and made sure the idea consumed him till he could do nothing else? The pillar reached Kotla in one piece but just as the labourers were getting it off the carriage, it crashed, breaking into pieces. And that’s exactly what happened to his dynasty a few decades later.

I wonder if the djinn-saint, like elephants looking at a bug trying to reach the sun, continues to laugh at us for our little hopes and desires. Or do the long-lived ones know better?