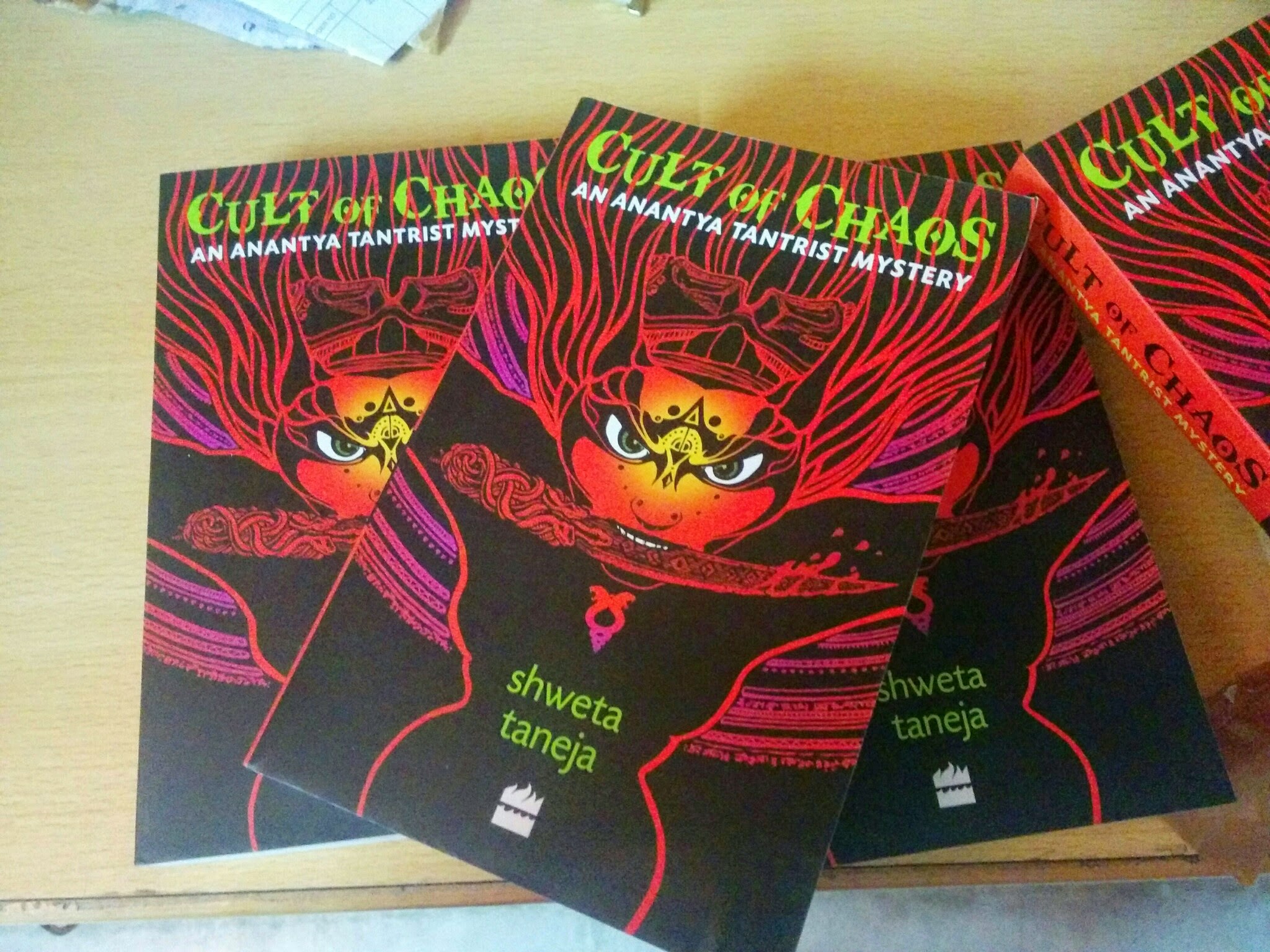 Oh this is fabulous! DNA carried this excerpt from Cult of Chaos on their online worlds this weekend. This is from the first chapter on the book in which Anantya has gone on a blind date. Of course, it ends bloody. 😀

This is why I rarely accepted cases from my own species and preferred to work with what humans call  ‘supernatural’ creatures. Sups of any kind, be it mayansor pashus, don’t judge tantriks by their  appearance. They determine your worth by the shakti you wield. Most of my cases over the last few years had involved sups. Ever since word had spread in the city that a pro-sup tantrik was ready to take on their cases, which was a rarity since most tantriks wanted to either kill them or enslave them, I had got all kinds of assignments. I had arbitrated between best friend asuras who become arch nemeses and, in their attempt to finish each other off, almost destroyed a chunk of Lodhi Garden between them; saved a yakshi from a spirit; a chandaali from a greedy tantrik and a tantrik from a vengeful bhuta. I  rarely refused a case. The only exceptions were the ones that involved daevas, elite heavenly spirits, who were as my teacher Dhuma put it concisely, treacherous trolls. A couple of days ago, I had turned down just such an offer. However, I was now beginning to regret it. Even dealing with a shifty daeva was better than sitting around a candle eating ducks and explaining myself to Mr SUV Headlights here. I took out my kapala, a skullcup that I used for my rituals, and placed it on the table.

‘Perhaps this will convince you?’ I said, smiling sweetly. The skull gleamed in the candlelight, throwing long dark shadows into the mirrors behind Nikhil.

‘Wow, a skullcup! Is it a real human skull?’ Nikhil inserted his hand inside its jaw and picked it up for a closer look. ‘Where did you find this one? I saw one on eBay the other day. Nothing less than one lakh rupees. Only the imitations are cheaper. How much did you pay for it?’

Was nothing sacred anymore? I stared at him, shocked, and wondered how many seconds it would take  for Lala to attack him. Lala was the old man whose skull Nikhil was molesting at the moment. Lala had begged me to ensure he didn’t descend into naraka after his death. He wanted to stay on in this world even if it meant that I used his skull as a sacrificial cup. So, after his funeral, I stole his head from his grave on a full-moon night. Ever since, Lala’s skull had been my kapala. And he hated anyone else touching it. How would you like it if someone poked inside your head? I dug out my boneblade, ready with a freezing mantra in case Lala fired up and became too hot for Nikhil to handle. (Although, frankly, a part of me was hoping Lala fired up.)

‘Are you Anantya Tantrist?’ asked a reedy voice behind me. I turned to see the headwaiter who had discussed wines with Nikhil a little while ago.

‘Yeah,’ I answered curtly. Nikhil plonked Lala back on the table.

‘You have an urgent call, madam,’ the waiter said. My old Nokia phone lay on the table. I switched on its screen. It seemed to be working. ‘Who is it?’ I asked, wondering if it was Dakini. No one else knew I had  come to this restaurant. The waiter paused and looked to his right, as if he was listening to someone.

‘Mister Qubera, madam. He wants to talk to you urgently, madam.’ For someone who stood in an air-conditioned space, the waiter’s face was very, very sweaty. Drops of perspiration rolled down his forehead and a droplet glistened at the tip of his chin.

‘I don’t know anyone …’ I stopped, suddenly realizing how quiet it had gone. So quiet that I could not hear the singer anymore or the tinkle of laughter. The singer was on the stage, but she had become mysteriously mute. The feeling that someone was watching us returned, and intensified painfully. I could kick myself for allowing Nikhil’s stupidities to distract me. I ought to have sorted this out before now. The waiter stared at me, his eyes vacant and glassy. He pinched and pulled the skin on his neck, like a shirt collar. Stupid, stupid rakshasa. Someday he will get into big trouble and get himself killed. Probably by me.

‘You have to come,’ he urged, bending down and grabbing my right arm with his clammy palm, his hand cold and hard as stone. ‘It’s urgent!’

‘What is the meaning of this?’ Nikhil hollered, his face pink with anger. ‘How dare you touch her? Where’s your manager? I want to speak to him!’

‘Sit down, Nikhil,’ I said quietly, my hand reaching for the boneblade in my satchel. I was glad I had brought it along, although I had left my belted scabbard at home. Fashion can be lethal for a tantrik.

Nikhil pushed the table away with a loud screech and rose to his intimidating six feet. Not that that would save him from a disgruntled rakshasa. He lunged, grabbed the waiter roughly by the shoulder and bellowed, ‘Let go of her!’

‘Urgent,’ the waiter whispered, sinking to his knees, his face still blank, his eyes empty, his left hand still frozen on my right arm. Poor guy. He didn’t have a choice really. I turned in one swift movement and slashed the waiter’s torso from his throat at the right collarbone to the solar plexus with the boneblade. Blood erupted and splattered my face and hair. A loud screech echoed somewhere behind me.

If you would like to read the book, order here:  Amazon