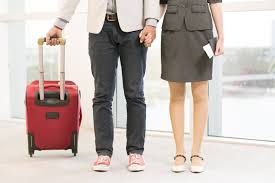 At times, these professional roadblocks force couples to live apart and continue their careers. Take the case of long-distance couple Vinay V. Kumar and Supriya Ebenezer.

In 2014, Kumar, an oral and maxillofacial surgeon, got a scholarship to do his PhD in Germany. Ebenezer had a good practice as a periodontal surgeon in Bengaluru and didn’t want to move. “Our careers are important for both of us. If Supriya wasn’t going to be productive, that would spoil the whole experience of being in a different country,” says Kumar, 38. So Ebenezer stayed behind in Bengaluru with their four-year old child, while Kumar started work on his PhD, spending four-five months in Germany.

In Brazil, Menezes had tried to get freelance assignments from law firms in the US and India, without much success. Last year, she segued to a new career as graphic designer. “I’m still doing pro-bono work in graphic design to prove my abilities, though my friends are top-shot lawyers with their own practices,” she says. Had she done more asking around, she believes, she would have been able to choose an alternative career earlier.

One good solution is to ask for help with the spouse’s career too, suggests McNulty.  “Ask the company hiring you about what assistance your partner can be given in getting a job,” she says.