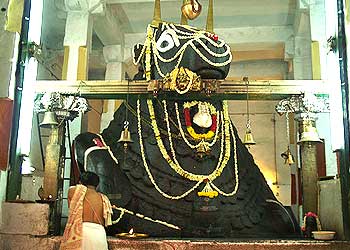 This story was recently carried in Swarajya magazine and got over 150 shares online. Thrilled! Editing this a bit and resharing.

Of stories, Oh muse speak to me.

Some time ago, I took a friend and her nine-year-old daughter to Bull Temple in Bengaluru. It’s the place with one of the country’s largest monolith bull, in the shape of Nandi, the servant bull of Shiva. The majestic Nandi far surpasses the tiny Shiva here, who you almost miss in a small alcove behind the bull. He is spectacular in size, structure and sheer architecture. To excite her, I promised this little lady, who was still sleepy and not too thrilled with the idea of seeing a temple, with a true story after she had seen the Nandi.

Once she was dragged her feet around the bull inside the temple, we sat outside in the temple courtyard, the black sculpture of Nandi behind us and I began the true story I had heard from someone at the same spot the first time I had come to the Bull temple:

“Hundred of years ago, Nandi, one of Shiva’s bravest warriors, was invited to come to the city of Bangalore to save it from its enemies. With all fanfare, a small statue of Nandi, the bull, was placed on top of a hill so that he could protect the city. But there was something special about this bull. Every morning when the people living around the hill woke up, they would find that the Nandi’s sculpture had grown in size. So it kept on happening again and again. At first the statue became the size of a dog, then a bull, then an elephant, then a dinosaur. This caused fear in the masses. Politicians and the adminsitrators of Bengaluru became afraid that if the bull keeps growing and becoming bigger and bigger, it will destroy their entire city. That was when a poet suggested that they build a temple around Nandi. If he is indoors, the poet predicted, he wouldn’t be able to look at the sky and his desire to grow more and more will stop. That will save their city. And so it was done. A temple was built around this ambitious Nandi, the walls so close that the ceiling touches the Nandi’s golden horns and there’s barely space enough to for the Nandi to stand inside. And as soon as a structure was created around the Nandi, the dinosaur-sized bull stopped growing in size, content to remain at that size forever.”

‘Is the story real?’ asked the nine-year-old wisely. ‘Yes, I think it is,’ I answered, ‘the person who told me, told me it was a true story.’ ‘No, you’re making this up,’ she replied, looking up to her mother for confirmation. Her mother, in an equal mood to make her daughter believe answered, ‘It could be real.’ She looked back at the majestic monolith of Nandi, doubt in her eyes, but also a newfound interest. Her mother looked back at me and smiled, conspiratorially. We had done it. We had plotted magic in a child’s heart.

I came back home and started to wonder why more and more of the children I see are not ready to believe in things beyond their five senses, in anything beyond rationality. I ask this to all children I meet in the various workshops I conduct in schools. They call believing in anything other than what’s been proved by science as superstition.

To a four-year-old who I met at a party one evening, I asked if he knows why we don’t see stars in the morning. When he shook his head, I told him because every morning a monster called the Sun gobbles them up. So when you see Sun, you cannot see the Stars. For a second, I saw doubt in his eyes and then he shook his head. ‘Not possible,’ he answered. When with all the dignity of my adulthood I insisted that that was the truth, he went back to his parents to confirm.

We have become a rational, logical society. So much so that we explain to our children that myths and all stories they hear are not real, not factual, but lies and fiction. In our eagerness to divide and tag everything with ‘facts’ and ‘fiction’, somewhere we lose out on the magic and in many ways the emotional truths that stories carry in themselves. Stories can capture the truths of love, creativity, imagination, dreams, aspirations and emotions, the way facts never really can. They give us a glimpse into another world. A world which is beyond what we know or understand, can touch, see and feel. They bring a sense of wonderment, of mystery, of the unknown, of possibility. Stories make us dream, so that we don’t live by the rules and facts provided to us, but make new rules, new societies, new cultures. Stories make us creative, they make us look at ourselves in a new way and bring about change in our beings.

By telling us tales of other people, other creatures, other cultures, other beings and other societies stories show us a different point of view and make us more accepting of differences. They make troll less online and accept that there can be multiple perspectives to the same thing, with none of them being completely wrong and none of them being completely the truth too. They turn us into mature, accepting beings.

I end this blog with yet another story, which my Nani told me a few months ago, sitting in her bedroom. She’s 75 now. I am, well, have been an adult since quite a while. Still, she sat me down like I was the little kid I used to be, her rheumy eyes watery (she has acute cataract and can barely see) and her voice quavered as she told me this story. A true story, she insisted which she had heard from her brother who had been to Haridwar recently, who had heard it from someone who had in reality experienced this:

‘One day in Haridwar, there was a fat-fat lady. She was so fat, so fat, so fat (Nani’s hands spread wide) that her body could barely fit into a car’s backseat. She stood on a road, asking for a ride from a rickshaw-wallah to Hari-ki-paudi, the popular holy ghat on the banks of Ganga. Since the fat-fat lady was so fat, no rickshaw driver was ready to take her up to the ghat, which is a winding road that goes up and then down and up again. She seemed too heavy! She asked many rickshaw drivers, and all of them refused. Finally a thin, scrawny driver pitied her and agreed to take her. He helped her alight on the rickshaw and started to peddle. Surprisingly, though she was so fat, the driver could peddle the rickshaw as if it was empty. She felt weightless.

‘He kept on turning back to see if the fat-fat lady was still on the rickshaw. God forbid she should fall! It was an easy ride for him and he reached the steps of the ghat, the Hari-ki-paudi. The fat-fat lady stepped down and said, “Please wait and take me back. I will just take 15 minutes for a quick dip in the Ganga and come back. Till then, hold on to this. It’s for you.’ With that she took out a handkerchief which was tied into a small pouch from her fat bosom and gave it to the rickshaw-puller. He nodded and waited. Fifteen minutes passed, then thirty, then an hour and then an hour again. The driver started to worry. Had she drowned? Worried, he went to the ghat and inquired. A lot of bathers saw a fat-fat lady go into the Ganga to take a dip but no one saw her come out. One bather informed him that he saw her clothes, floating in the water, but no woman inside them. ‘Poor lady,’ cried the rickshaw driver, ‘she has drowned in the waters of Ganga! She was so fat!’ He finally remembered the little handkerchief that she had given him and opened it. The kerchief had precious emeralds and rubies and diamonds! He went back to the same road he had picked her up from and inquired about the fat-fat lady. Finally he found out that the fat-fat lady had lived in an ashram in Haridwar. She was a rich lady and had died there with a wish to take a dip in the Ganga on her lips. She had died a year before she had met the rickshaw driver! ‘She was a soul who needed to take a dip in the Ganga to be released,’ he thought, ‘and because I happened to help her that she gave me so much money.’ The precious stones had made him enough money to make sure that he and seven of his generations wouldn’t need to work. ‘This is the biggest tip anyone will ever get,’ he thought before giving his rickshaw away. He wouldn’t need it now. This is a true story. My brother heard it from a guy who had happened to meet the rickshaw driver.’

Thank you, Nani, for making my eyes go round with wonderment, even though I insisted after the story had ended that there was no way it could be a true story. Could it?

PS: I hope instead of facts in comment boxes below, everyone tells stories and tales that they heard in temples, roadsides and from grandparents that made their eyes pop out in wonder.

2 Replies to “Are stories real?”