She’s naked, covered with ashes, her hair matted with snakes in them, a garland of skulls and freshly cut heads around her neck. She laughs like madness herself, dancing to the chaotic rhythm of death, dragging a corpse behind her which she licks with her blood-red tongue from time to time.

Now imagine meeting her in the middle of the night on a dark lonely path. Here’s an old description – a dhyana mantra of Guhya Kali, one of the forms of Kali. The tantric text is called Tantrasaara and is written by Krishnananda Aagamavgisa. 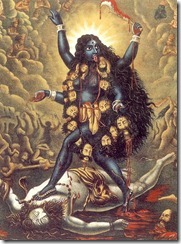 “She is dark as a great cloud, clad in dark clothes. Her tongue is poised as if to lick. She has fearful teeth, sunken eyes and is smiling. She wears a necklace of snakes, the half-moon rests on her forehead, she has matted hair, and is engaged in licking a corpse. her sacred thread is a snake, and she lies on a bed of snakes. She holds a garland of fifty heads. She has a large belly, and on her head is Ananta with a thousand heads. On all sides she is surrounded by snakes….She has a snake-girdle and an anklet of jewels. On her left is to be imagined Shiva in the form of a boy. She has two hands and has corpses for ear ornaments. Her face, decked with bright new jewels, shows she is pleased and calm.”

She’s not likeable. Hell, she’s scary. In Hindu mythology, she’s nature— something that causes death and destruction, something that’s wild and raging, something that’s unpredictable and uncontrollable. Her hair are wild and open (mark of undomesticated woman or someone who doesn’t belong to a husband-ry), she dances naked outside. Both being naked and being outside is something that is forbidden to the female gender in our society.

You wouldn’t invite her into your homes (unlike the more demure Lakshmi, goddess of wealth or Saraswati, goddess of knowledge). She’s wild, frantic, out of control. She’s nature in its more fearful, horrific form, an earthquake, a hurricane, a tsunami. Her world is the one where a dog butchers another and all of them perish.

No wonder the patriarchal society, the cultured society, the rule based, control-based society, you and me, tremble at the very thought of her. You see, the patriarchal society is all about control – through rules, rituals, and routines. Do this, and you will get this. Do this and this and you can prevent death and disease from happening to you. If there’s a death in a neighbour’s house, don’t go there, for you might catch that disease.

If there’s a garbage-collector coming near you, step away, even though he takes your own garbage. Don’t touch him as he touches something filthy and you will become filthy too. Oh, your left hand is by default filthy. It wipes your bum after all!

Both genders are mired in rules, rituals and routines in this society – all in an effort to control life, prosper and save oneself from death. A man should control his estate and his woman, a woman should control her body and keep herself inside the house, under her husband. Both should stick to the codified laws of dharma created by some rishis a few thousand years ago. People most probably too stuck up to let their hair down.

Since she’s uncontrollable and fearful, like everything else, she’s associated with tantrics, who all mainstream Hindus see as charlatans, black magicians or simply people who are evil or threaten the codes of the patriarchal society. Like Bhairava (Both Kali and Bhairava feature in one of the most beautiful stories I have written in my upcoming graphic novel The Skull Rosary) she’s a goddess who belongs to the fringes of the society. She and her worshippers are associated with blood sacrifice, sometimes even human sacrifice. S

he’s the patron of thugs and witches—both of whom threaten the society’s status quo. Patriarchal society intellectuals have alternatively looked at her ugly form (by societal standards) as filthy, fearful or downright disgusting. That’s the reason you would not see rich merchants in Calcutta or Gujarat worshipping her. She’s of the night, meant for those who roam about the shamshaan in the night. She’s death itself.

If you worship her, you are either crazy or inconceivably evil. You are definitely not a well-wisher of the society. You are an outsider. Her image is the opposite to the mainstream, civilized society. She distrupts society. Personally, she inspires me and pushes me to write. She is the destruction and inspiration of creative energies itself and my heart beats in tandava with every step she takes.

I wrote this blog long time ago, but am sharing it here to celebrate the upcoming Kali puja. May you be as understanding of the darkness as you are of light.

Enjoy some of the visuals I have collected of her—most of them are drawn by painters, created by sculptures in the last 1000 years.

I will do another blog post on the Bengal traditions of her as soon as I find time to study that! Did you like this blog?