Excessive salt intake can cause cardiovascular diseases and is especially harmful for those who have a sedentary lifestyle. It’s time to go easy on that pinch

Kanwal Batra, 50, a Delhi-based businessman, was in a dilemma when his naturopathy doctor told him to avoid salt till the eczema eruptions on his body were controlled. “I didn’t know how to react. Salt is a basic taste, how can one leave it?” was his initial reaction. The first few weeks of a salt-less diet were tough. “I couldn’t swallow the food. It had no taste!”

Later, he was surprised by the taste of vegetables such as gourd and spinach. “All of them had natural levels of salt in them. In palak (spinach), for example, the salt content is high and soon enough it tasted fine when cooked without salt,” he says. In fact, he now feels that adding salt actually kills the intrinsic flavour in vegetables.

One level teaspoon of salt or 5g provides about 2,300mg of sodium. Most Indians consume more than this amount. “Usually Indians have around 8.5g of salt per day, which is much higher than the 5g recommended by the World Health Organization (WHO),” says K. Damayanti, a scientist at the National Institute of Nutrition in Hyderabad. Sodium and chloride, both available in salt, help to keep the level of fluids in the body balanced. Chloride is not too harmful to the body, but an overdose of sodium has been directly linked to an increase in blood pressure (hypertension) and cardiovascular diseases.

According to Dr Damayanti, “sedentary workers”, or people with desk jobs, need no more than 5g of salt per day. “This amount of salt gives 2,000mg of sodium to the body, which is more than enough for healthy Indian adults working in offices,” she says. The number changes, according to her, if you are sweating too much—either due to the environment or physical exercise. “For people working in rural areas in heat conditions or for athletes, 7-8g of salt every day is more than enough.” 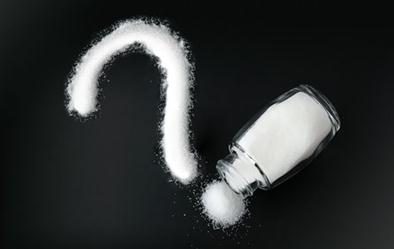 “When we eat more salt than the body needs, it gets accumulated in every cell in our body. This is similar to toxic waste,” explains Ramesh Hotchandani, consultant in nephrology at Moolchand Medcity, New Delhi. “The effect of this on your cells is similar to what happens when salt is sprinkled on to vegetables or fruits. They wilt because the salt draws out their water. The same thing happens inside your body to your organs and cells,” adds Vijaya Venkat, founder and director of the Health Awareness Centre in Mumbai, which has been doing research on nutrition for the last 20 years and helps people adopt healthier lifestyles.

Usually our body is efficient and can get rid of this toxic waste. Drinking a lot of water helps rid the body of excess salt accumulation. “The salts accumulated in the body come out in the form of urine and sweat,” says Dr Hotchandani. In the long term, a habit of excessive salt intake causes blood pressure to rise, leading to hypertension and eventually, to heart-related problems. “Your body retains water within its system to neutralize the salt’s acidic effect,” explains Venkat. “An ounce of salt can hold three quarts of water within the system. This increases the pressure in your arteries, leading to an increase in blood pressure.”

Stop excess salt from entering your body on the sly

Table salt contains the highest levels of sodium. Once it’s off the table, you will resist the tendency to sprinkle salt on cooked food as well as fresh ones such as curd, salads and fruits.

Limit use while cooking

“Don’t use more than 2-3g of salt in your daily cooking,” says Taru Agarwal, researcher, Nutri-Health Systems, in Delhi. “Start by reducing salt in cooking and in recipes to half the amount,” says nutritionist Ishi Khosla, Whole Foods, Delhi. To keep a measure, create a 3g pouch for your daily needs. “Use salt only from this pouch, whether in cooked or uncooked food,” says Ramesh Hotchandani, consultant in nephrology at Moolchand Medcity, New Delhi, who uses this technique to help hypertensive patients limit their intake of salt content. Sprinkle salt on food after it is cooked. You will find you are using less salt if you cook this way.

Today, almost all processed foods contain salt; the question is how much. “Considering that we consume salt in everything from baby food to invisible additives found in all processed food, our ‘disguised’ consumption of salt is really very high,” says Vijaya Venkat, founder and director of the Health Awareness Centre in Mumbai. Processed foods such as bread, chips, ‘khakra’, ‘papad’, breakfast cereals, salty snacks, ready-to-eat meals, canned soups, biscuits, salted butter, cheese—all have high salt and sodium content. A tablespoon of regular ketchup, for example, has a whopping 160-190mg of sodium.

Avoid processed foods wherever you can and replace them with easy-to-make recipes using raw food materials. Make your own sauces using your favourite salt substitute or herb/spice blend. “Use low salt soy sauce diluted with lemon juice,” suggests Khosla. Balsamic vinegar or olive oil are also good replacements. Anything that has been pickled, packed in brine or canned contains a high amount of sodium. Avoid it.

Use spices instead of salt

Salt is a kind of flavour that our taste buds have got used to. Condition yourself to enjoy other flavours such as spices, lemon, lime, vinegar, or salt-free seasoning blends of herbs such as oregano, basil, dill, rosemary or thyme. Garlic is another strong flavour that can replace the need for salt with practice. Fresh lime, mango, tamarind, ‘kokum’, celery and seaweed can be used as substitute condiments instead of salt, suggests Venkat.