Last night, I started to re-read my fave guy, Isaac Asimov. This time, I am re-hooked to his short stories on robots. Then in the morning papers, I saw this. It’s a story about  Justin the robot, who serves you coffee. It’s a cute squiggly looking bright blue robot, made by the German air and space agency, a super-techno, super-expensive guy has four-finger hands and is a step towards a humanoid. And well, serves you coffee.

Which took me to a very important question. What is it with people wanting their coffee to be served? We humans went through a whole round of imperialism where the ones who had money and wanted more money, and more importantly, more hands to do things for free for them. Brown, black, evil, good, trashy white, blue, anything will do till someone is serving you a coffee for free.

Even our Heavens have the idea of slaves serving the people who didn’t kill, lie and hid their bodies in apt clothes. Have you heard of anyone working to wash their clothes in Heaven? That wouldn’t be so heavenly would it, now? We need our slaves. It’s the sign that we have made it in life. 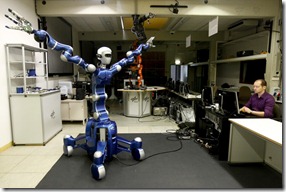 Now the era of human slavery has somewhat ended with words like freedom and independence being taught to everyone around us. Slavery is not a politically and culturally correct idea to talk about . That doesn’t mean it’s not happening.

Mechanical slaves! Who would have not thought of it!

The intrinsic human need to be served has led the German scientists to work on a robot which will serve them a cup of coffee. Before it, it was the slaved coffee machine. This is the era when a new slave will come to life. So creating a good-boy slave is the next project for our civilisation. A slave that wont tire, wont crib, wont go to the human rights violation committee, wont have issues or emotions. An ideal slave. An ideal butler. Yes, robots are the future slaves. As Asimov had rightly predicted.

I will finish this with one more thought. If we depend on slaves, aren’t we becomes slaves of slaves? Slaves of technology, slaves of robots? Ah, that’s how it all started. Didn’t it?

2 Replies to “Will robots become the new slaves?”