Touchdown to Mumbai after three years and the first thing I had was a watermelon juice. As usual, smiling and remembering old times. While I tried to paid the over enthusiastic waiter, I saw that my wallet was missing. A frantic search began at 11.30pm as me and my friends realized that yes, it was gone.

The result of all the mayhem, cancelling the cards and reminiscing how I could have done this or done that and various other if and buts later, we decided to go to the police station the next day. 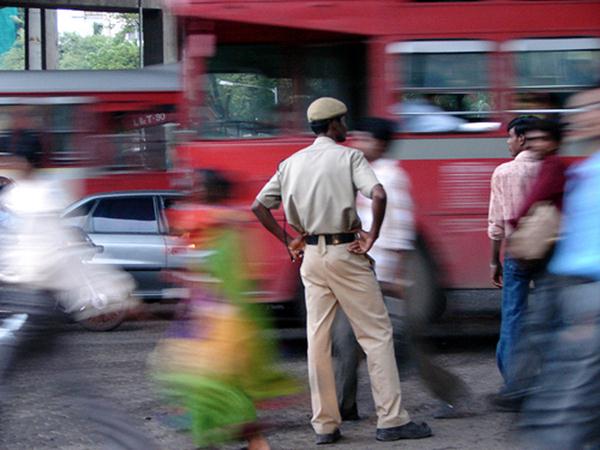 Now I know that many of you might have been to a station for various reasons – things lost, people lost, people found on the road sleeping, complaint about bleary music playing in the apartment next to you. For you, it is as common and frequent as going to the grocery shop. For me, count me lucky/unlucky depending on which side of law you are standing on, it was the first time. What can I say! I could have been lawful or just plain stayed away from law or even living in a city like Delhi, was superbly protected. I am lucky that way!

So it was with awe that I entered a quaint little police station on Colaba Causeway. My heart scuttled away and nervously overdid the job of pumping and for a split second I remembered all the horrendous things I had heard about the Indian police force. A friend had once told me how she had been harassed for filing a simple stupid complaint. And then there were always these newspaper headlines about rapes, robbery, extortion and corruption all done by cops in our beautiful country. Make believe headlines splashed across my head, making me cringe inwardly. Of course I didn’t show this to my husband who would never be affected by something as mundane as a visit to the station.

With secret, hidden trepidation I entered. The cop outside, barely visible behind a stack of loose cement bags and a gun (don’t know which), asked us our purpose.

By this time, my purpose of life was flashing before my eyes. But that’s a secret and if you tell it to someone I will have to kill you. Outwardly, using aggressive body language, we delhi-wallas are taught before we learn to walk, I mumbled that I wanted to report a lost wallet. We were pointed inside where vague people mingled with each other or alone in utter confusion. I announced my entry with the word ‘purse’. An official standing on the other side of a table beckoned us and started hearing my story. First there were questions. Who are you? When did you enter Mumbai, where did you lose the wallet? I told him the story (lying about where my wallet was lost since otherwise we would have to go back to the airport and you know Mumbai traffic, don’t you?) He stared at me, knowing fully well that I was lying through my pretty teeth. But I kept the fake bravado on. Then came my main purpose of talk. Wallet lost, fine. Money lost, fine. Cards gone with the wind, fine can be handled. How do I handle my license being lost?

Now don’t get me wrong, fine I was lying about somethings but my wallet did get lost as did my driving license. The policeman said that he cannot file an FIR till I get an affidavit from a notary on a Rs 100 stamp paper that my license was lost. I mean, I am a complete loco? My logic cannot go beyond A + A = 2A, so I probably didn’t understand. How can I, who is a victim, has just lost a wallet, and is a tourist, go find a notary, get a piece of paper signed that I did lost my license for a simple complaint of lost wallet? I am standing there and claiming it to be lost, how does a piece of paper change this??

I was baffled and like I do when faced with something I don’t understand, I argued. I asked him why he couldn’t believe moi over a person who knew how to sign papers. He shrugged and mumbled about it being a government document so only a government person could say I had lost my license and not me. Oh, btw even that government official will just stamp it when I give him a Rs 100 note. I could be lying there as well.

But the policeman, who wanted to be helpful, was adamant. Process has to be followed and only then an FIR can be lodged. I saw him as stuck as I was in rules, regulations and processes which had been set and could not be un-set. How are we free, btw? Him and me?

On another note, a pickpocket, who looked like a lower middle class guy, wearing specs and carrying a broken tote, tried to pick my husband’s pocket for his wallet while we travelled in a bus. My husband had been prewarned by savvy Indians (me and his dad) to keep his wallet in the front pocket. The man managed to take out a piece of a paper. My man caught him doing it but let it go. He has a world to survive in as much as we. With the food prices rising, I don’t blame him. Maybe he should try some politician or cop’s pocket. But that will make him a mining lord.

My learnings. The policeman standing next to you is not a villain but a babu – cursing his superiors and stuck in processed. Oh, and keep the wallet in the front pocket in public transport.

PS: This post is barely edited as I wanted unadulterated, raw bafflement to come through, splattered in a rush.