Touring the Vatican museum, the audio guide informed me that a beautiful Roman time statue I saw in front of me (that of a marble woman, her curves delicately hidden by a flowing gown) was in fact a copy of the same figurine of a Greek sculpture, now destroyed. Copycat! I shouted, gleaming at the fact that it wasn’t a new phenomenon.  I thought this was the only one. To my surprise though, the whole gallery (and the Vatican museum has huge galleries) all the statues there had the same inscription. See how the plaque explained it. 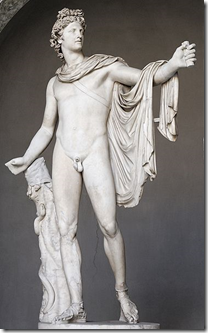 Belvedere Apollo, by Leochares. Roman copy of 130–140 AD after a Greek bronze original of 330–320 BC. Vatican Museums (source: Wikipedia)

Laocoön and his sons, also known as the Laocoön Group. Copy after an Hellenistic original from ca. 200 BC. Vatican Museums (source: Wikipedia)

Copying you see was an ancient form of appreciation in the Greeks and then the Romans. The helpful audio guide continued while I stood there astounded.  So you see the Greeks copied other cultures, the Romans copied the Greeks, the Renaissance artists copied both of them and then the neo-classical ones copied all of them. In the meanwhile the same period artists copied each other. Arch rivals copied with envy, while the students copied their master’s work to celebrate it. It was all in good faith. Woah! What was that again? For me, who belongs to an increasingly copyrighted world, this is downright blasphemy! ‘Copying is very, very bad! Almost evil! Don’t ever do it again!’ I remember by art teacher saying it as I peeked into a friend’s sketchbook on how she was making that tree. It’s the same with mythology btw. I just wrote a graphic novel on Krishna, a grand figure from the Mahabharata and am slightly ashamed by the guilt feeling that came in me which told me that it’s not an original (Gosh, did I just rewrite someone else’s story?).

I mean why didn’t the original Greek creator, the original one please, sue all these others? What did the law court do if not sue these copiers?  As if telepathically, the audio guide gave me the answer. Apparently copying a sculpture in the ancient European world (Greek, Hellenistic, Roman, Renaissance and then Neo-Classical periods) was not only considered good, the copy was considered an ORIGINAL!How can a copy ever be considered original? It reminded me of something an artist friend of mine told me. ‘Shweta, he said. Don’t ever think that you copied a mythology. If you have written the story, it’s an original, even if it’s a story that all grandmothers of India know by heart.’ If you create it, a part of it becomes yours. Did he by any chance knew how the Romans thought? Maybe, maybe not, but that is not the question. The question is, Is copying, gosh I can barely say it, the highest form of appreciation? After all, aren’t we all copiers of nature? We try to xerox it in words, visuals and sculptures.

In our copyrighted world, where branding is everything, copying is the eight sin. Forget celebration, the copiers are usually struck with a lawsuit and sued for millions (depending upon who is the artist) and paralleled to devils and evil people. It’s considered the worse kind of creativity, in fact, there’s no creativity in a copy. Oh, and btw, I was sure about this myself. As an author who’s writing my first book, I dream of a time when I wont be financially dependent and the only way to do that is to copyright and sell my creative work. if someone copies it, I will be completely heartbroken.

But then what about the new copy-paste generation that is coming up? Aren’t they, with information just a google search away and no qualms about copy-pasting articles, thoughts, ideas from the online world, going the same way as the Romans? There’s one difference though. The Romans were crediting the master they copied. So if someone copies you as a creator and credits you for the original, would you be all right? Or do you need a part of the royalties?

I just took a two week trip to Paris and Italy. Instead of a one-shot summary of the travel, I am breaking my experiences up in thoughts, ideas and learning I took away from the beautiful continent. Presented in a series of blogs called Notes from Europe, it will be written across a few days, weeks or months, I am not sure which. I aim to present things I remember to have thought when I was in the continent from where modern culture as we know it has stemmed from.