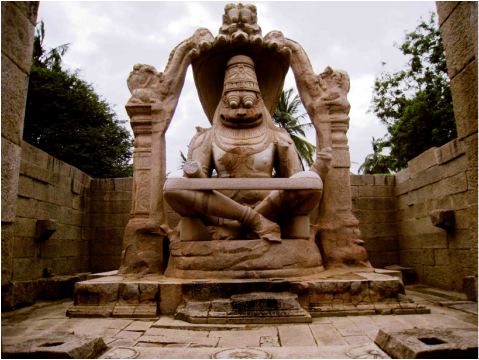 The sun is high and hot, slashing the skin, but the breeze and the swaying coconut trees soften it, scattering shadows and cooling the meandering unpaved path I follow. The long, deceiving coconut leaves suddenly move to reveal the monolith I search for. Six and a half meters tall, the monolith of Narasimha, an avatar of Vishnu, overpowers me, making me feel helpless and tiny, an ant standing infront of an incensed elephant.

He sits there cross-legged, immense and majestic, back straight, cobra-hood throwing shadows on his sunkissed face. His tennis-ball-size eyes blaze, no matter where I stand. I am dwarfed.

Narasimha is an angry god. He broke demon Hiranyakashipu’s neck like a twig and clawed his stomach and wore his intestines as a garland, screaming in extreme delight. All because the demon king had forbidden his son Prahlad from worshipping Vishnu in the Asuric kingdom and was trying to murder the devout boy.

But not many know of what happened to him after he had done his duty for the gods. In one of the most spectacular tales I’ve come across during my readings of the puranas, the same Narasimha, after killing the demon, couldn’t control his own wrath and like an unstoppable nuclear bomb, kept exploding, burning and destroying the universe till Shiva, the god of destruction, had to intervene at the request of the devas and stop Narasimha.

The tale saw two superheroes of mythology face each other in an ultimate fight. One version says, Shiva in the form of Sharabha, an eight-legged beast, with two heads, and a strange mix of all kinds of carnivorous animals defeated Vishnu’s avatar.

The other version is vociferous that Narasimha took the form of Gandaberunda, a more ferocious bird-animal mash-up and blew Sharabha to smithereens. Whatever version you believe in, the story explores the uncontrollability of anger and how it is capable of destruction. I wrote another version, in comic format as part of my book The Skull Rosary. For that’s how tales are. They belong to no one, yet everyone feels entitled to take credit on knowing the ‘right version’.

The tipped ASI board standing like a drunk sentry near Narasimha’s monolith informs me this one is not the ugra or the angry form that tried to destroy the universe. This one is the benevolent Lakshmi Narasimha, his anger abated, his desire to destruct lessened by the tiny Lakshmi who sits on his right thigh, marred invisible by ravages of time which have broken everything but her hand, still carved around his waist. But the way his fangs pop out of his oblong cavity of a stretched mouth, his smile looks more like a snarl and it is difficult to believe that Lakshmi has any tempering effect on the guy.

In Andhra Pradesh, the tribals have their own tale. They recall how Hiranyakashipu ordered his guards to throw Prahalada in the sea, placed a boulder on him as punishment for worshipping Vishnu and that the child was rescued by Samudra, the ocean god himself. There is no mention of Holika, Hiranyakashipu’s sister, who is part of all grandma tales in northern states of the country.

The same Samudra, due to a curse was born in a tribe named Chenchu. After Narasimha had killed Hiranyakashipu, the gods invites him back to the divine abode, but he refused. Instead, he travelled through the jungles of Andhra Pradhesh where he fell for a local girl, Chenchita, the daughter of Samudra reborn, a tribal huntress who wielded a bow.

The love tale delicately describes how Narasimha plucked a thorn out of Chenchita’s foot and so wanted to marry her. Chenchita didn’t say yes immediately. She wanted to be sure he’s the right husband for her and so tested him on his food gathering and hunting skills, important for survival in the jungle. From then on, Narasimha stayed on, as a son-in-law of the tribe, coming in their dreams, to cure them of ailments.

In Simhachalam, ten miles from Vishakhapatnam, he is a composite form of Varaha and Narasimha. Scholars claim the deity is local, assimilated into the Vaishnav mainstream centuries later. Centuries ago, so the locals claim, this was a Shiva temple. When Ramanuja visited this temple, he defeated the local priests in a debate and so converted the temple into a Vaishnava one.

I am quite fascinated with upmanship between the Vaishnava and Shiva cults, something which comes out very strongly in the story of Narasimha and Sharabha. Being a storyteller who thrives in versions rather than limit myself to one of them, I converted the whole Sharabha retelling into a dream in my graphic rendition, The Skull Rosary. For in dreams, even the impossible becomes possible. It’s Prahlad, the biggest devotee who has the dream about this cosmic fight.

The one where Narasimha, the god he worships goes out of control, trying to destroy the universe. It’s a dream, or maybe not. Prahlad is not sure but he sees the one he idolizes destroying the universe with his ferocious anger. How can his god be so destructive? And how can his god in turn be destroyed by another of the pantheon?

And if you’ve seen the blasphemous dream, how do you erase it? At the end of the story, Prahlada, who if you remember in the story is merely 12 years old when he sees his god come in Narasimha form and brutally kill his father, is terrified and confused.

In modern times, someone would’ve suggested a psychiatrist to analysis his dreams, but at that time, all he has is Narada Muni. So he goes to the Muni and asks: ‘Who is stronger, Shiva or Vishnu’s avatar?’ Narada smiles and says: ‘Vishnu and Shiva are like seasons. One comes after another. One dies, one is born. Like life and death. Don’t fall into the trap of comparison, the one that feed arrogant blood.‘ For he’s Narada, the journalist of Indian mythology, and will never take a side. Or will he?

If you know any other versions of Narasimha folklore, please do add them below in the comments section. For stories that other readers have posted, head to SwarajyaMag.com and enjoy!

A different version of this came out in Discover India (January 2015) as my first column with them along with stars like Ruskin Bond (awesome author) and Rocky Singh (Highway on My Plate). 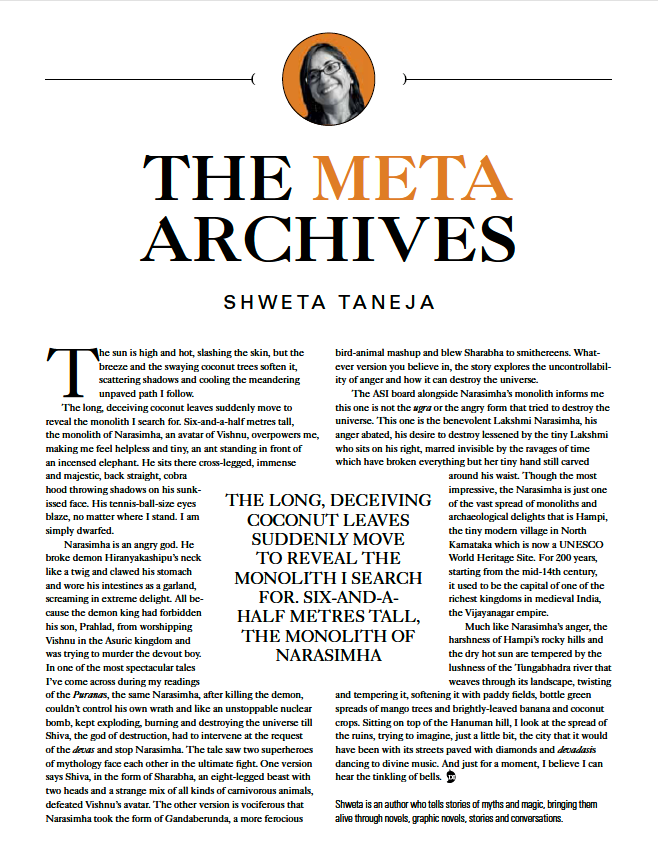