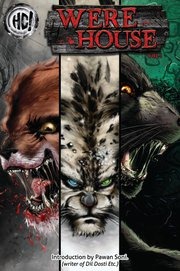 It’s a dog’s death is an experimentative comic in the horror genre. It’s a futuristic story about a weredhole in the year 2312. It has all elements that I love compressing together: fantasy, sci-fi, horror and human sensitivity.

The story is part of a 50-page anthology titled Werehouse – the house of Monsters drawn by artist Vivek Goel. The anthology includes two more stories other than mine by talented writers Akshay Dhar and Saumya Das. If you like horror, read this one for a feast of blood, gore and scare involving shapeshifters with a storyline which became surprisingly beautiful while I was writing it.

‘Were House Vol 1 is a refreshing return to the horror roots of were creatures. It contains three gripping tales of three mesmerizing were-creatures. The graphic anthology is wholly illustrated by Vivek Goel in stellar black and white one-shots and written by three talented writers.’ – Blogpost on realms-of-insanity.blogspot.in

‘I recently read your comic ‘It’s a dog’s death’, I think it was the best in the book and you have done a great job. The sci-fi setting is clever, the main character is amazing and that final twist was wonderful. I hope you write more stories. Wish you luck.’ – Vikrant Ananthula over email.

‘While Vivek Goel’s artwork was incredible throughout Werehouse #1, the thing that was lacking throughout was powerful writing. This held true till the third story began, which for the first time managed to do exactly what a comic should – intoxicate the brain. The narrative was tight, the POV unique and triggers for each panel were carefully placed ensuring that hungry eyes moved over and over the lines. I look forward to Skull Rosary and Krishna and anything else you write.’ – Affy from Mumbai over email

Buy it: You can order a copy on Homeshop18