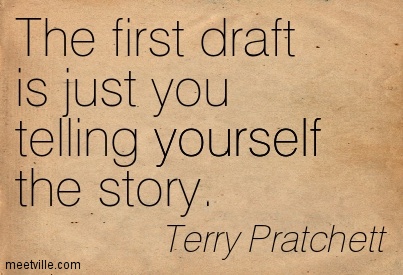 Fantasy is more than wizards. For instance, this book is about rats that are intelligent. But it also about the even more fantastic idea that humans are capable of intelligence as well. Far more beguiling than the idea that evil can be destroyed by throwing a piece of expensive jewellery into a volcano is the possibility that evil can be defused by talking. The fantasy of justice is more interesting that the fantasy of fairies, and more truly fantastic. In the book the rats go to war, which is, I hope, gripping. But then they make peace, which is astonishing.

In any case, genre is just a flavouring. It’s not the whole meal. Don’t get confused by the scenery.

A novel set in Tombstone, Arizona, on October 26, 1881 is what– a Western? The scenery says so, the clothes say so, but the story does not automatically become a Western. Why let a few cactuses tell you what to think? It might be a counterfactual, or a historical novel, or a searing literary indictment of something or other, or a horror novel, or even, perhaps, a romance – although the young lovers would have to speak up a bit and possibly even hide under the table, because the gunfight at the OK corral was going on at the time.

We categorize too much on the basis of unreliable assumption. A literary novel written by Brian Aldiss must be science fiction, because he is a known science fiction writer; a science fiction novel by Margaret Attwood is literature because she is a literary novelist. Recent Discworld books have spun on such concerns as the nature of belief, politics and even of journalistic freedom, but put in one lousy dragon and they call you a fantasy writer.

This is not, on the whole, a complaint. But as I have said, it seems to me that dragons are not really the pure quill of fantasy, when properly done. Real fantasy is that a man with a printing press might defy an entire government because of some half-formed belief that there may be such a thing as the truth. Anyway, fantasy needs no defence now. As a genre it has become quire respectable in recent years. At least, it can demonstrably make lots and lots and lots of money, which passes for respectable these days. When you can by a plastic Gandalf with kung-fu grip and rocket launcher, you know fantasy has broken through.

But I’m a humorous writer too, and humour is a real problem.

It was interesting to see how Maurice was reviewed here and in the US. Over there, where I’ve only recently made much of an impression, the reviews tended to be quite serious and detailed with, as Maurice himself would have put it, ‘long words, like “corrugated iron”‘ Over here, while being very nice, they tended towards the ‘another wacky, zany book by comic author Terry Pratchett’. In fact Maurice has no wack and very little zane. It’s quite a serious book. Only the scenery is funny.

The problem is that we think the opposite of funny is serious. It is not. In fact, as G K Chesterton pointed out, the opposite of funny is not funny, and the opposite of serious is not serious. Benny Hill was funny and not serious; Rory Bremner is funny and serious; most politicians are serious but, unfortunately, not funny. Humour has its uses. Laughter can get through the keyhole while seriousness is still hammering on the door. New ideas can ride in on the back of a joke, old ideas can be given an added edge.

Which reminds me… Chesterton is not read much these days, and his style and approach belong to another time and, now, can irritate. You have to read in a slightly different language. And then, just when the ‘ho, good landlord, a pint of your finest English ale!’ style gets you down, you run across a gem, cogently expressed. He famously defended fairy stories against those who said they told children that there were monsters; children already know that there are monsters, he said, and fairy stories teach them that monsters can be killed. We now know that the monsters may not simply have scales and sleep under a mountain. They may be in our own heads.

In Maurice, the rats have to confront them all: real monsters, some of whom have many legs, some merely have two, but some, perhaps the worse, are the ones they invent. The rats are intelligent. They’re the first rats in the world to be afraid of the dark, and they people the shadows with imaginary monsters. An act of extreme significance to them is the lighting of a flame.

People have already asked me if I had the current international situation in mind when I wrote the book. The answer is no. I wouldn’t insult even rats by turning them into handy metaphors. It’s just unfortunate that the current international situation is pretty much the same old dull, stupid international situation, in a world obsessed by the monsters it has made up, dragons that are hard to kill. We look around and see foreign policies that are little more than the taking of revenge for the revenge that was taken in revenge for the revenge last time. It’s a path that leads only downwards, and still the world flocks along it. It makes you want to spit. The dinosaurs were thick as concrete, but they survived for one hundred and fifty million years and it took a damn great asteroid to knock them out. I find myself wonder wondering now if intelligence comes with its own built-in asteroid.

Of course, as the aforesaid writer of humorous fantasy I’m obsessed by wacky, zany ideas. One is that rats might talk. But sometimes I’m even capable of weirder, more ridiculous ideas, such the possibility of a happy ending. Sometimes, when I’m really, really wacky and on a fresh dose of zany, I’m just capable of entertaining the fantastic idea that, in certain circumstances, Homo Sapiens might actually be capable of thinking. It must be worth a go, since we’ve tried everything else.

Writing for children is harder that writing for adults, if you’re doing it right. What I thought was going to be a funny story about a cat organizing a swindle based on the Pied Piper legend turned out to be a major project, in which I was aided and encouraged and given hope by Philippa Dickinson and Sue Coates at Doubleday or whatever they’re calling themselves this week, and Anne Hoppe of HarperCollins in New York, who waylaid me in an alley in Manhattan and insisted on publishing the book and even promised to protect me from that most feared of creatures, the American copy editor.

And I must thank you, the judges, in the hope that your sanity and critical faculties may speedily be returned to you. And finally, my thanks to the rest of you, the loose agglomeration of editors and teachers and librarians that I usually refer to, mostly with a smile, as the dirndl mafia. You keep the flame alive.