I and the husband had been waiting desperately to read the third in the explosive political trilogy called the Raisina Series by Krishan Pratap Singh. So much so, that I used my research skills and managed to dig up the online-shy KP Singh’s email ID to spam him a demand email on it. He was polite enough to reply with a yes, it’s on its way. So you can understand how with much fanfare, we bought a copy of The War Ministry from a bookshelf. For those who haven’t read the first two of the trilogy (Delhi Durbar and Young Turks) Hachette India is now offering them at a much lower price. (Grr.) 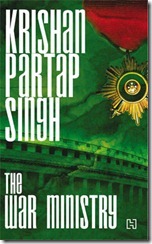 The trilogy revolves around two friends, Azim Khan and Karan Nehru and their friendship in the power corridors of Raisina hills. It maps their journey as they arrive with freshly minted ideals on the grimy scenes of politics and what happens to them in the process of becoming the most powerful leaders in this country. It’s a powerful and current premise to build a story in and Singh touches on all issues our democracy faces right now–be it corruption, media playing its tune, casteism, foreign policy, bouts with our neighbours or the babu behind the ministers.

The third is written really tight, but doesn’t have the fluidity of the first two books. It seems to jump or lag and go into some descriptive non-fiction style paragraphs, which I struggled with. Maybe it was edited with too tight a hand, or maybe Singh tried to put in too much of his vision of what India can become in a single book. But that doesn’t say that it’s not a rivetting book. Singh strength lies in building up a story around politicians who are real life-like characters. Who deal with India that is now. It’s the negotiations, relationships and respect that these worldly-wise politicians and babus deciding the fate of India go through every day, is what makes for riveting reading. When he’s using his strength—of characters and their relationships with each other, the writing completely shines and etches itself, much like June’s sun in Uttar Pradesh.

It’s his flawed, reality-etched characters that make the book and the series. Even the minor characters are beautifully fleshed out with their caste-oriented experiences and the past baggage they carry into their jobs. And as the first two books proved to me, Singh is a deft player with character and language in his world, something that I have rarely seen in an Indian author’s writing. Like the first two of the series, the third is equally delicious in its delicate, polite style of writing. He has the ability to take anyone from a murderer to a villainous character and write about him or her in a merciful, sympathetic tone. He’s forgiving to everything from malicious intensions to greed. For in the grimy world of politics, you cannot survive (or write about it) if you are not forgiving.

The trilogy made me do something I never thought will happen. It made me become more sympathetic to what out politicians have to go through with either because of their ideals, their belief systems or greed and ambitions. That’s Singh’s power as an author and a visionary and I bow to that. And it’s the vision Singh paints that remains with you. A vision of what India can become, only if it had leaders half the caliber as Khan or Nehru.  The books made me sigh with hope for this beautiful country of mine. It made me shrug the cynicism of years of listening to ‘is country ka kutch nahi hoga’ and led me to hope and dream and wait for such a leader to rise. The imagined world of Singh, so close to our real one, is like our National Anthem. It makes the hair on the back of my neck rise in pride. I would like to end the review with a quote from one of my email exchanges with Singh on his vision:

“I’m still positive about this country because India has been around for thousands of years and will be around for thousands more, and all kinds of incompetent rulers have come and gone, but the country keeps chugging along. We cling to hope and dream to be inspired one day by the call of a leader who will be worthy. Until then, we wait…and write fiction!”

Read the book for its story, read it for its vision and characters.

KP Singh is currently writing short stories and a non-fiction. You can chase him on Twitter @RaisinaSeries